The quantity of locally grown broad beans in finisher pig feed has been increased by 200%, with a positive impact on pig performance for Finnish pig producer Terhi Harjunmaa-Levonen.

Tehri from Harjunmaa Farm in Finland aimed to increase the usage of locally grown protein in pig feed. They found that Faba beans (broad beans) may be an alternative protein source to soybean and so began cultivating faba bean crop approximately eight years ago.

To increase the usage of faba beans in pig feed, they developed a tailored premix together with a local feed company (Rehux) and HKScan. The faba bean inclusion level was approximately 10-12% of the dry matter of the liquid feed. This feed was then given to all the finisher pigs (30-120 kg liveweight). The locally grown protein included barley, wheat, oatmeal, broad bean, liquid barley protein (a by-product of a local distillery). There were two seperate diets fed, both based on local proteins, during the finishing stage.

As well as being used as an alternative source of protein, faba bean cultivation can be beneficial to the crop in the next rotation. Faba beans bind to nitrogen and so, can improve the growth of grain crops. Because of this, the farm has increased the area in which they grow faba bean crop (by 150%).

The production costs of pig meat produced with this alternative protein feed can be compared with the standard soybean meal which can be calculated using an Interpig model. 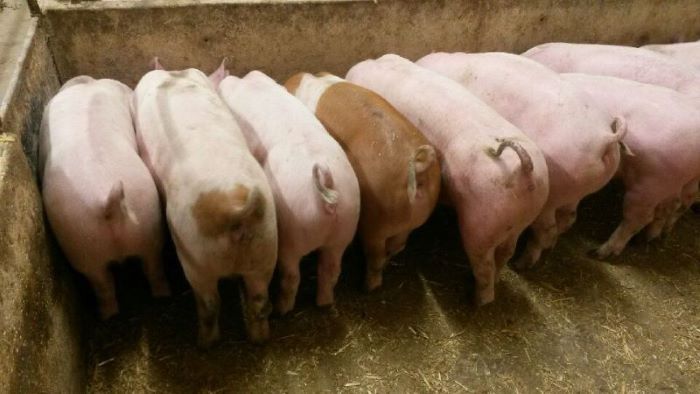 "I want to continue producing and eating pork with a good conscience. Feeding our pigs with non-GMO and soy-free protein which has been produced in our own fields nearby remarkably reduces the climate impact of our swine farming." Tehri Harjunmaa-Levonen